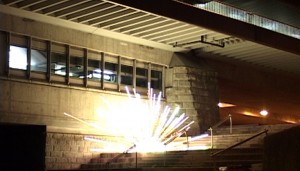 12 Explosionen shows a series of tableaus filmed in Vienna at night. Before the explosions occur, we only have a short moment to adapt to their dimly lit surroundings: deserted parking lots, industrial landscapes, a footpath, a pedestrian bridge made of steel. They are all virtually waiting for something to happen, and because of the title, we know it will. After a brief period of only hearing the location’s natural surround sound (traffic, the wind), there’s the imminent explosion, shaking up our head and shoulders as well as our gaze at the screen time after time.

But wait, there’s more. While we hear the explosion, there’s a simultaneous cut in the footage, showing the explosion from a different angle. But we are almost too distracted by the light and the reverberating sound of the explosion in these public spaces to really register this change of perspective. And to come back to its obvious title, can you keep track of the number of explosions while your brain is stirred in between each one? Does it even count up to twelve? 12 Explosionen is a study of perception by a filmmaker with a sense of humor who simply wanted to try something out, because he could. Precisely executed and staged, and never been done before: This is what experimental film should be like.

BIO Johann Lurf, born in 1982 in Vienna, is a film maker who graduated from the Viennese Academy of Fine Arts, and attended the Slade Academy in London. His short film “Vertigo Rush”, a study on the dolly zoom, premiered at the International Film Festival Rotterdam 2008. His experimental films have received numerous awards, and have been screened at Medienwerkstatt Vienna, Austria; Tokyo Metropolitan Museum of Photography, Japan; New Art Exchange Nottingham, United Kingdom, and Iberia Center for Contemporary Art, Beijing, China. After working as a projectionist for several years, he is now also engaged in stereoscopic development.