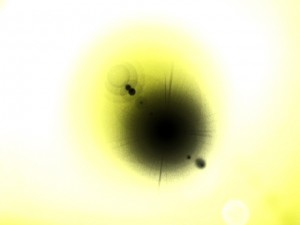 Warning: This film makes use of bright, pulsating light. If you are susceptible to epileptic or photic seizures, this film is not for you.

1859 is composed from a sequence of 30 still frames documenting a lens flare. Through rigorous video editing, going frame by frame as well as with radical jump cuts, Fred Worden generates a series of eye piercing flicker effects. Literally shooting its rays of light at the viewer, our eyeballs are being stabbed by the exploding lights, until the light source starts to resemble an eyeball itself, its pupil and iris shapes constantly inverting themselves in a rotating play of who will get to our retina first.

It’s an intense experience, yet somehow, we can’t look away either. Being a silent film, the piece largely relies on our eyes, but the brain easily makes up for that by adding its own, inaudible noise soundtrack somewhere in the back of your skull. Whether you have a loud screaming metal band in mind, or an equally loud minimal composition by Philip Glass, it is worth noting that the work is dedicated to Bruce McClure, whose audio-visual performance works frequently have an aggressive but strictly modulated noise bombardment.

Altogether, the work forms a hypnotic, mesmerizing and at the same time unsettling, almost nauseating trip, depending on the viewer’s personal perception. And a trip it’s meant to be, as Worden describes in his program notes that accompany the piece when it’s screened: “LSD is illegal. 1859 is not.”

Worden’s films develop out of his interest in intermittent projection as the source of cinema’s primordial powers. How a stream of still pictures passing through a projector at a speed meant to overwhelm the eyes might be harnessed to purposes other than representation or naturalism. Worden received his MFA in film from the California Institute of the Arts, and is a faculty member in the Department of Visual Arts at the University of Maryland, Baltimore County.