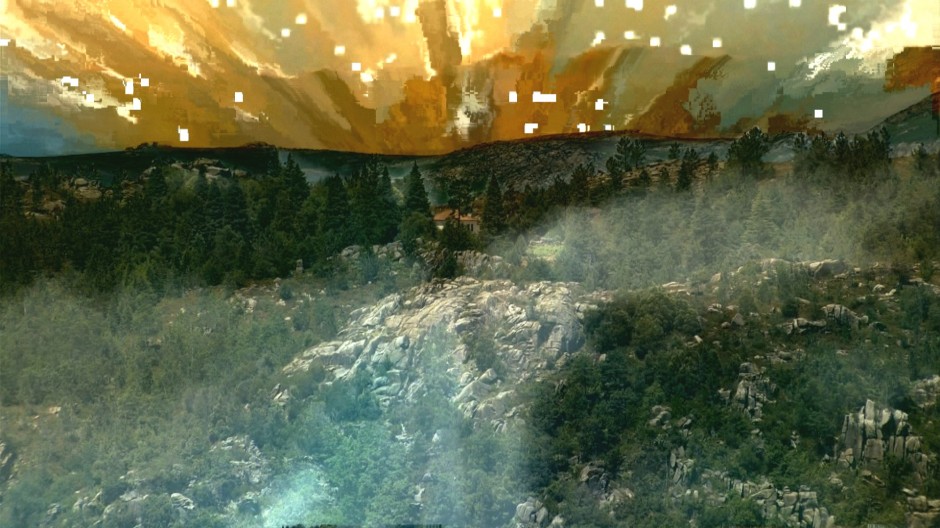 José Miguel Biscaya’s #29 is part of a series of video works that research the relationship between landscape representation and perception. The viewer’s eye is slowly pulled into the depth of the landscape as the image steadily zooms in on the center, bringing the background to the foreground. In most nature documentaries, this would result in a higher quality experience of the details. Instead, Biscaya zooms in on and enlarges the inaccuracies, and brings down the quality even more through his rigorous, hack-like editing process.

Rather than enhancing the image in post-production, he removes crucial data from the text-based source code of the mpeg file. When saving and then playing the file in video software, it forces the program to re-interpret the faulty text as visuals. Gaps appear where color existed, glitches and further pixelation further complete the rendering of the work.

The work is programmed as an online parallel to, and in playful dialog with Dora Garcia’s Joycean Society, which is projected in Suburban’s physical screening space. Garcia explores the boundaries of language among the reading group as well as within James Joyce’s vocabulary of self-invented words, and copy-pasted vowels to replicate sounds. Biscaya works in a similar manner by pushing the limits of the written code of programming languages.

Biography
José Miguel Biscaya, born in Lisbon Portugal in 1973, is a mixed-media artist, experimental filmmaker and video performer, living and working in Amsterdam.
His work has been shown in numerous international group-exhibitions and festivals, including IFFR, EYE-Filmmuseum, EMAF, IMPAKT, Rencontres
Internationales Paris/Madrid/Berlin and POP-UP Lisboa. José is currently researching the relation between landscape and the human mind, while working on
a new series, a landscape study dealing with perception and the unconscious. www.jmbiscaya.com