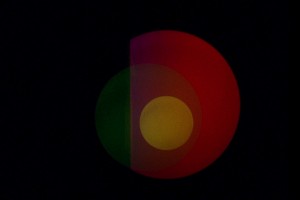 As Eva Rothschild wrote in Frieze, ‘Sophie Michael’s films are like a visual hide-and-seek. Her work brings together sculpture and film in such a way that ordinary objects are transformed for us by the minutely directed specificity of her looking. The reels unfold kaleidoscopically before the eye, looping through analogue sequences of manipulated light and glimpsed environments that are both confused and familiar yet all shot through with an acute awareness of the nostalgia we attach to both formats and objects.’

The silent film 99 Clerkenwell Road is no different. Filmed in an empty shop, the remaining features of the space are used to create a kaleidoscopic light film. Ceiling lamps become coloured spheres and circles that sweep across the frame. Pillars provide wipes and fades, window shutters are hole punched stencils, passing buses shoot beams of light. A toy solar system appears. Scale and depth constantly shift and colours are blindly combined as exposures gradually multiply. Overexposed glimpses of a wall or a flashing bollard outside bring the viewer down to earth.
“This gorgeous film is all sweet spot: limpid discs of color with a Matisse-like intensity.” – Lesley Chow, Experimental Faces

BIO Sophie Michael (b. 1985) lives and works in London. Michael studied at Slade School of Fine Art and graduated from Royal Academy Schools, London in 2012. She was the recipient of the Prince of Wales Bursary for the Arts at the British School at Athens 2012- 13. Recent group exhibitions and screenings include Young London, V22; Experimental Shorts, 61st Melbourne International Film Festival, Melbourne; TIFF, Toronto; International Film Festival Rotterdam; 25FPS, Zagreb; and SWITCH, BALTIC 39, Newcastle Upon Tyne, all 2012.