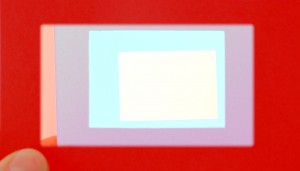 Paired with Rebecca Baron’s Detour de Force that is screened as part of IFFR, Simon Payne’s Cut Out is hosted on the Parallel Screen, as an unofficial companion to his work Not and Or, which is taken up in the IFFR program.

Cut Out is a largely hand-made film, involving different colored cards, with apertures cut out of them, superimposed in combinations starting from opposite ends of a simple spectrum (from yellow to blue). The method of superimposition is more complicated than it might seem at first, adding to the instability of the various planes, edges and colors. Form and content merge to create other forms, make substance from absence, make the abstract concrete, play with observation, challenge perception, and, ultimately, vanish.

BIO Simon Payne studied Time Based Media at the Kent Institute of Art and Design, Maidstone and Electronic Imaging at Duncan of Jordanstone, Dundee. He received a PhD from the Royal College of Art in 2008. His work has been shown in numerous festivals and venues including: BFI London Film Festival, Anthology Film Archives, New York; International Film Festival Rotterdam; European Media Arts Festival, Osnabrück; Pacific Film Archives, San Francisco; Media City, Windsor, Ontario; Edinburgh Film Festival; Serpentine and Whitechapel Galleries in London; and at Tate Modern for whom he also curated a series of programmes, entitled Colour Field Films and Videos, in 2008. His videos are distributed by the artists’ film and video organisation LUX, and they are also kept at the British Artists’ Film and Video Study Collection at Central St. Martins College of Art. He is Senior Lecturer in Film and Media Studies at Anglia Ruskin University, and lives in London. Simon Payne is also editor of Sequence published by no.w.here.