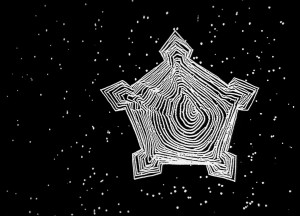 “The films of Alexander Stewart are variously energetic and animated and oddly geological. They flirt with the legacies of structural film and psychedelic cinema while adding significantly to the obscure traditions of the hand-drawn animation and film-as-abstract-graphic-art. Revealing an obsessive fascination with gradual accumulation of marks and movements and with self-imposed challenges and limitations, Stewart’s films press against their own boundaries and reveal glistening grace under pressure.” – Steve Polta, SF Cinematheque

His recent film Fort Morgan is an equally complex and sprawling dream work which examines the title’s original structure, a star-shaped brick fort near Stewart’s hometown on the Alabama Gulf Coast, which played a great role in the coastal defense system during America’s Civil War. Taking his Bolex out to rediscover and map the unique design of the fort whenever he visited his hometown, Stewart transformed the wondrous history of the place into a mysterious graphic exploration of its form and geological surroundings.

He worked on the film on and off for about six or seven years, and the film equally takes its time to introduce us to this extraordinary location, moving between animation, time-lapse and miniatures to share its interlinked subject matter. From a series of black and white animations that delicately outline the fort’s geometric shape, we suddenly find ourselves face to face with an extreme close-up of an oyster, its soft flesh gently shimmering in the light. It feels like somewhat of a jump, but it turns out we have actually jumped straight into the fort’s ancient walls, as the mortar between the bricks was made from oyster shells when it was built in 1834.

While we wander around the fort, we’re guided by the brick-laying figure of a man. Neither from here nor there, then or now, he may have just started building or he may have been building walls forever. Both looking for a place to belong and belonging exactly where he is, he opens the doors through time and space to reveal the fort’s hidden gems.
16mm onto HD video, 2014, 22′

BIO Alexander Stewart (1981, Mobile, AL) is an artist and filmmaker with an MFA from the School of the Art Institute of Chicago. His short films have screened internationally, including at the International Film Festival Rotterdam; Crossroads Festival, San Francisco; Slamdance Film Festival; Ann Arbor Film Festival; and ImageForum in Japan. He is co-director of the Eyeworks Festival of Experimental Animation, and curated a screening series at Roots & Culture Contemporary Art Center from 2006-2013. He teaches animation at DePaul University and lives in Chicago.