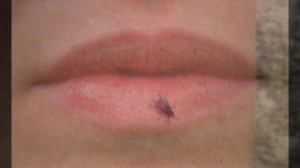 Grandma’s Dream was created as a companion piece to Wantee, Laure Prouvost’s short film about the fictional relationship between her grandfather and the artist Kurt Schwitters. Prouvost was awarded the 2013 Turner Prize for Wantee, which was on view at Suburban Project Space the weeks prior to the showing of Grandma’s Dream on the Parallel Screen.

While Wantee’s main subject is Prouvost’s grandfather, Grandma’s Dream explores the sorrows and dreams of her grandmother, the abandoned partner of the man who went missing in the tunnel he’s been digging for twenty years. Prouvost first introduced the grandfather character in her 2010 films ‘I need to take care of my conceptual grandad’ and ‘The Artist’. He remains to be a physically absent figure, existing only in Prouvost’s narratives. Much like the maker herself actually, who plays a vital role in the narration and voice-over, but she only appears in the frame when she’s in need of hands to show objects that are part of the story. She hardly films people, Prouvost explains in an interview with MetropolisM: “I quite like that the viewer creates the character. There’s a voice which creates a phantasma, and the viewer finishes the image. You always grab what you can to make sense of what you see.”

In the rosy, blue sky visions of Grandma’s Dream, planes that are half teapot, half plane serve tea from the sky. Although somewhat softer and dreamlike in nature, especially in its whispered narrative, the imagery and story are closely connected to Wantee, where the offering and making of tea runs through the entire film – Wantee being a reference to Schwitters’ girlfriend, who was nicknamed Wantee for offering people tea all the time. Similar to Wantee, and many of Prouvost’s other works, Grandma’s Dream combines language and images to construct invented storylines, exploring the blurry lines between fiction and reality.

In its full form as a mixed media installation, Grandma’s Dream is shown in a bedroom-like setting featuring a double bed and soft pink walls, similar to the presentation of the work for the Turner Prize. Prouvost: “I wanted some kind of a counterpart: the grandmother, the feminine, the struggle, the relationship in this period of time when it was all about the male, the master. My grandmother loves pink, she’s full of cliché’s. I didn’t want to make a feminist comment, but it was more about bringing two sides of a story.”

BIO Laure Prouvost (born 1978, Lille, France) is a French artist with a focus on installation, collage and film. She lives and works in London, where she acquired her MFA at Goldsmiths College, London, 2010. After graduating from her BFA at Saint Martins in 2002, she worked as an assistant to the artist John Latham, who she describes as “more like a grandfather than my real grandfather”. Her work has been exhibited extensively worldwide, most recently at Tate Britain, Whitechapel Gallery, and Institute of Contemporary Art, London; New Museum, New York; Neuer Berliner Kunstverein, Berlin; Austrian Film Museum, Vienna; and Grand Palais, Paris. Provoust won the 2013 Turner Prize for her work Wantee.