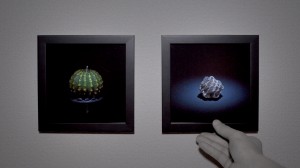 This is a film about the end.

The end has already started, and ended. We call it the end in order to perceive it and make it visible, but it already passed when we called it the end. The end is always penetrating the present, so we can not separate the time before the end, nor recognize it as being different from the end. The end has already started, and ended.

With this film, Arikawa creates a somewhat somber and highly captivating environment, equally supported by the carefully composed imagery as its succinct crackling soundtrack. The opening scene fades in from black and surrounds us with darkness, allowing us to relax and lean back a little bit, but leaving us weary at the same time. The ground rule of scary, dark movies echoes in the back of your head. Never trust the dark. You never know what it’s hiding. As our eyes and ears quickly adjust and become more sensitive to discern the utmost detail, we slowly move into a room with a window. It looks out on a dimly lit wall not too far behind it, in stark contrast with the dark interior that surrounds it. This is where we begin. Yet with a film of this title, one is even more conscious of the fact that the audience has no choice but to follow the maker’s path that he’s singlehandedly carved out for us to the end. But beware, the end has already started, and ended.

An open window. Small particles dance around in the wind. Black flies flock together on the windowsill. Back to darkness. Two prickly cacti catch a ray of light on a staircase. A sliver of smoke. Back to darkness. Then, an opening that looks out onto sea. Layers of water rippling on top of one another, without ever colliding. A soft grey moon is multiplied and superimposed on sparkling orange flames. A single cloud of smoke. The sun. White and red lights shimmer on the evening’s ocean surface.   Layer after layer of shimmering light trickles in and seems to dance to the beat of that ominous, omnipresent rhythmical soundtrack. Both unnerving and soothing, it meanders between the foreground and the background, unnoticeably noticeable, depending on your perception. Towards the end, the soundtrack synchs up with the imagery even better. Smoke and sunlight enter the picture again, and as they move over the staircase, feeding the immovable cacti, the pulsating rhythm is joined by a high pitched tone as we start to reach the end. A cactus-shaped candle starts to burn down, its excess hot wax pouring over its edge, while an organic looking, cell-like structure crumples up, burns down, and turns to ash. Back to darkness. Back to the beginning. Back to the end. The end has already started, and ended.

The talented Japanese artist Shigeo Arikawa visualizes our experience of time, the passing of time, and the rhythm of a narrative as it builds up, gains momentum and fades away until it reaches the inevitable end. An end that can only be described as a vague feeling and subtle realization of ‘imminent danger,’ both on behalf of the viewer and the filmmaker – in his own unique style, which is mysterious, yet utterly consistent. It has already been ended before you can see the end is on exclusive view at Suburban Project Space only days after its highly successful screening at theInternational Documentary Film Festival Amsterdam, during the Amsterdam Art Weekend.

BIO Shigeo Arikawa (born 1982, Tokyo, Japan) is an artist and filmmaker. In 2006, he graduated from the Tokyo University of the Arts. In 2014, he moved from his home town Tokyo to Amsterdam, where he’s an artist-in-residence at the Rijksakademie. Through the frame of photography and video media, Shigeo creates elements that pass through our meshes of perception: elements that are subtly vague or metamorphosing, though appearing distinctly. He expands the notion of seeing in order to expose where images, that appear or are constructed in time and place, are from.His films have been show a.o. at Image Forum Festival, Tokyo and the International Film Festival Rotterdam.