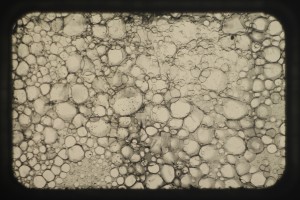 Lieutenant Konrad and his horse Kurfurst became famous for their appearance in Leni Riefenstahl’s recording of the 1936 Olympic Games in Berlin. Konrad briefly became a national hero, only to become an anti-hero when he was himself overpowered by his role in history. In her film Konrad & Kurfurst, Esther Urlus uses this footage as a point of departure to research the lost properties of early film emulsion, by re-inventing techniques from the time before color film was created.
Urlus was specifically interested in the process of coloring the film by tinting and toning the black and white footage, frame by frame. At the same time, she explored the properties of reticulation, which is the breaking of the emulsion layer into symmetric patterns, an aspect of film that has become extinct with the use of new film techniques.

BIO Esther Urlus (b. 1966) is a Rotterdam-based artist working with motion picture film formats Super8, 16mm and 35mm. Resulting in films, performances and installations, her works always arise from DIY methods. Kneading the material, by trial, error and (re) inventing, she creates new work. Urlus is the founder of WORM Filmwerkplaats, an artist-run workspace dedicated to motion picture film as an artistic, expressive medium. Her work has been exhibited and screened at film festivals worldwide, among other Oberhausen Short Film Festival, Sonic Acts, and the International Film Festival Rotterdam.