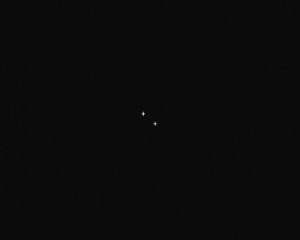 A small white cross moves against an otherwise black, empty screen, then multiplies itself to become two crosses that dance around the screen together, only to then disappear together. An intimate love story with text and whispers by Anouk de Clercq and sound design by Anton Aeki.