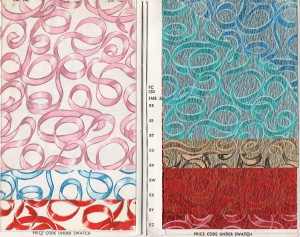 Combining the formal techniques and structures of abstract, absolute animation with those of cinematic genres, Jodie Mack’s handmade films use collage to explore the relationship between graphic cinema and storytelling, and the tension between form and meaning. Equally categorized as musical documentary and stroboscopic archive, her films feature subjects such as domestic and recycled materials to highlight the overlap between fine-art abstraction and mass-produced graphic design. Always questioning the role of decoration in daily life, the works unleash the kinetic energy of overlooked and wasted objects.

Her video New Fancy Foils has been shown at film festivals around the globe as part of her successful touring program Let Your Light Shine, which contained five films including the mid-length documentary Dusty Stacks of Mom. Mack accompanied the program herself to add a sound track to the film, which she sung live in front of the audience. While it was an integral part of this program, New Fancy Foils also functions as a stand-alone, silent film. Cutting from sequence to sequence, the footage shows details of discarded catalogs and paper sample books once belonging to now long-gone businesses. Through a series of sequential experiments in pattern, rhythm, color, text and texture, the work has been composed in such a rhythmical manner that the viewer can almost complete the sound track to the beat of Mack’s visual drum. A call and response of flickering and lingering images, the work forms an archive of its own kind, a catalog of catalogs if you will, reminiscent of a tactile economy.