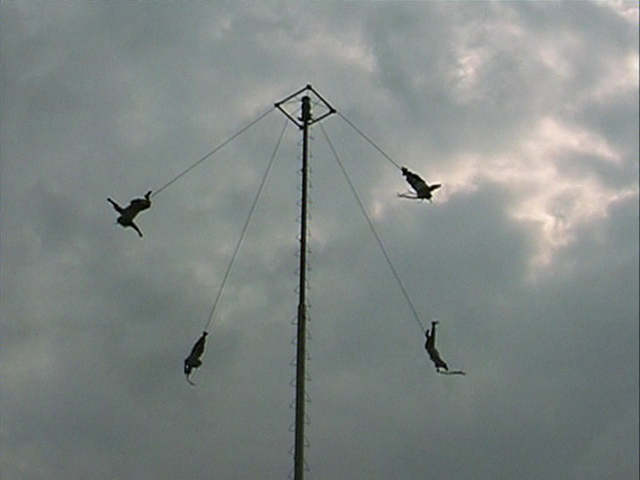 A man, filmed from the back, stares out to sea. Two goldfish swim in a pond littered with banknotes. A crumpled plastic bag is blown along the gutter of a street. Round shapes and centrifugal motion reoccur: a man stands in the center of a roundabout, a colorful merry-go-round speeds around, a solar eclipse appears several times. In the succession of unrelated images, the man’s dark hair against his light skin somehow starts to resemble the eclipse, while a close-up of a strange, pointy golden object is quickly followed by a zoom into a headless statue on top of a church.

Oracle is a carefully collaged collection of curious images, shot over ten years during multiple trips, that leave the viewer wondering how they all connect and what the plot might be. However, while each moment unfolds in front of our eyes, Diaz Morales aims to lead us into the future rather than linger in the present moment. His work is very much informed by what the futuristic writer J.G. Ballard had to say on the matter: “Our lives today are not conducted in linear terms. They are much more quantified; a stream of random events is taking place. We will learn to live thinking that everything happens at the same time.”

Something Diaz Morales can relate to: “Future is something that intrigues me. The way elements of the present come together to form a parallel idea or concept of what we understand for ‘the real’. Through this transportation the works tend to create distance from our daily perception. Oracle does a reading on the essence of things, things which are common today but that can create certain abstraction on time.”

In a time in which futurism has been caught and passed by post-futurism, Diaz Morales’ images act as signs of timelessness. Like an oracle, they speak about the future as a continuous extension of the present. ‘Now’ is revealed to the viewer only as a point of tension between the past and the future, leaving it open to where this now might lead.

Bio Sebastian Diaz Morales was born in Comodoro Rivadavia, Argentina, in 1975 and lives and works in Amsterdam. He attended the Universidad del Cine de Antin in Argentina from 1993-1999, the Rijksakademie van Beeldende Kunsten in Amsterdam from 2000-2001, and did a residency at Le Fresnoy in Tourcoing, France from 2003-2004. His work reveals a profound desire for freedom: in documentaries, video essays or short films, Diaz Morales is as concerned with experiment as he is with narrative.

His films mix fiction and reality, presenting individuals confronted by the natural environment or by the pressures of a society torn by political and economic imbalances. These films are often somewhat surreal, establishing a tension between a depicted social reality and its representation in a visually abstract or fantasy inflicted way. Throughout his works, multiple forms of dependence are explored, including dependent relationships between people, the environment, and social structures.