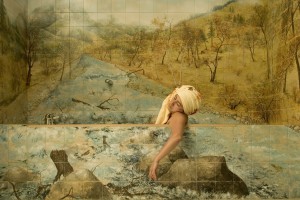 Over the past twenty years Irina Botea has been engaged in an art practice that uses video, performance and installation to inspect socio-political dynamics and the possibility of transformation. Botea’s artistic methodology combines re-enactment strategies, simulated auditions, elements of direct cinema and cinéma vérité.

She develops her works through a process of collaboration in which the performers are active participants in the process, with lots of room for things to play themselves out organically, as opposed to employing actors who carry out a predefined script. As a filmmaker her role is in constant flux, shifting from an observational to a reflective, participatory and performative mode. She always has to keep an eye on the work as a whole as well, and decide – in the moment, while it happens – where to steer the work next, and when to let it run its own course. Balancing this thin line on a gut feeling, this requires a very developed sense of knowing when to control a situation, and when to let go.

Therefore, the narrative usually meanders between documentary-style observation, and improvisational role-play, which allows her enough space to constantly push these terrains a little bit closer toward each other. But, as Oliver Kielmayer, the director of Kunsthalle Winterthur in Zürich describes, “her main target is not to create a fiction that is taken for reality. Her interest lies in the reality of the performance and the authentic individuality of the performers.”

In her recent work, Botea is mainly active behind the camera, but in her earlier work Out of the Bear we see her in front of the camera. In a few different settings, we see her explore the rooms of a big country house and its direct surroundings. This is only one of Nicolae Ceausescu’s 40 holiday getaways in Romania, which were gifted to him by communist party leaders when he was the General Secretary of the party and Head of State until 1989. Under Ceausescu’s repressive and rigid regime which controlled the media and freedom of speech, the house was unused for 10 years, and when he did finally arrive, he only stayed for one afternoon.

Touching upon the wealth and freedom that was unlocked and given back to the people after the fall of the party in 1989, Irina Botea inhabited the house for three days while she inserted herself into the picture, and made herself part of the place and the gruesome history it represents: “Frame-by-frame, the animated stills document my interaction with the house; the dead bear rugs lining the floor, the elaborately painted and designed bathroom, and the surrounding lake. Surfing the house was an attempt to release the tensions accumulated from the house’s history, an exorcism ‘a la moi’.”

With the well-known expression “history repeats itself” in mind, Botea succeeds in doing quite the opposite. While performing her small, repetitive gestures, she actively makes herself part of history, thereby changing its course a little bit and imbuing it with a more open and playful regime of her own. Taking back the house of the hunter that Ceausescu was, she literally climbs out of his accomplishments, out of his bearskin trophies, and leaves the bear behind. Rather than getting stuck in the past, and re-living the country’s traumatic events over and over again, she actively chooses to orchestrate these repetitive loops in such a witty and tongue-in-cheek way that she regains control over the past in a positive way, and perhaps while doing so, helps us imagine and rehearse for a history we actually want to be part of.