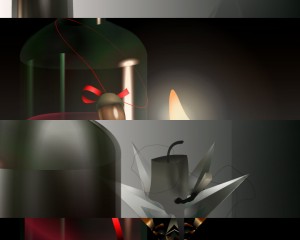 Sebastian Buerkner’s intricate and starkly beautiful films are painstakingly drawn using computer software, creating layers and fragments of imagery, shape and color. Buerkner’s work explores the nature of film and moving image, its structure and language, and the way it can alter our perceptions of space, time and the world around us.

Realms Pin is a journey through time and space, cut up and retold in a series of horizontal bands that move up and down across the image, revealing and obscuring new imagery with each movement. The objects in the frame appear and disappear, to render visible an alternate reality. They are both witnesses and players in the story, their ever-changing appearance unmasking the full story cut by cut, scene by scene.

BIO Sebastian Buerkner (born 1975, Berlin) studied painting in Germany, then moved to London to complete his fine art education with an MA at Chelsea College of Art & Design in 2002, where he was awarded a Fellowship Residency the following year. Since 2004 his art practice has shifted exclusively to animation. His work has been exhibited in several group and solo shows internationally. He has had solo exhibitions in London at the Lounge Gallery, Whitechapel Project Space, and The Showroom. Among other, his work has been shown at both Tate Modern and Tate Britain London; Oberhausen Film Festival, Germany; and the International Film Festival Rotterdam, where his spectacular 3D stereoscopic animation Chimera of M won a Tiger Award for short film in 2013.