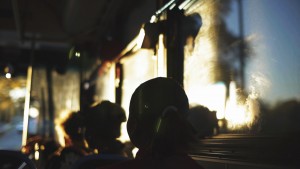 Over the years, Joel Wanek has developed a creative documentary practice that often blurs the line between subject and maker, while utilizing public spaces for collaborative engagement, and mixing narrative techniques with cinéma vérité.
Documentary work, for me,” says Wanek, “is not defined by a certain style or technique but by achieving a deeper engagement with my subjects. I use the camera as a tool for interaction and exchange, an instrument for initiating a dialogue between myself and my subjects. My thesis work heightens and celebrates the random, chance encounters with strangers that happen in public spaces of the city.”
His MFA thesis and silent film Sun Song is a poetic journey from the darkness of early dawn, into the brightness of the midday sun in the American South. Filmed over the course of six months riding the #16 bus route in Durham, North Carolina, where Wanek was attending graduate school at the time, Sun Song is a celebration of light and a meditation on leaving. As writer Darren Hughes remarked after having attended a screening and Q&A of the work, “He’d shoot in the morning on the east-bound route and in the evenings while headed west, so that the bus was always driving directly into the light. (…) Wanek is not another Walker Evans, who famously carried a concealed camera onto Depression-era New York subway trains in order to capture the ‘true’ faces of passengers. The subjects of Wanek’s portraits are active participants in this journey, which lends the images a curious grace and dignity, and the world they inhabit is cloistered, commonplace and sublime.”