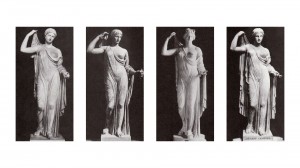 Befitting the global consumerist, post-futurist themes of Suburban’s november program, in which all data in the world seems to be readily available for all to use, the Parallel Screen hosts three videos by Oliver Laric from his series Versions.

Equally brilliantly sourced and composed as Jesse McLean’s The Invisible World, Laric’s Versions (2012) for example pairs Disney footage from Winnie the Pooh with footage from The Jungle Book. While several scenes from the two different movies are shown side by side, it is immediately visible that they are based on the same background imagery. In disturbingly similar surroundings, Mowgli appears to be only a slightly skinnier and tanner version of Pooh’s friend Christopher Robin, and the boys’ movements are exactly identical as they jump off a slightly different version of the same rock in unison, and walk onto an altered version of the same tree.

“Same, same, but different. The multi-verse is composed of a quantum superposition of infinitely many, increasingly divergent, non-communicating, parallel universes, or quantum worlds,” a female computerized voice informs us calmly. A voiceover that is actually the recorded voice of an actress that Laric instructed to mimic the stilted diction of text-to-speech software. Another version within a version of a version (of yet another version? Let’s not get carried away).

Between the three Versions to date, a seemingly never-ending stream of related yet unrelated imagery rolls by at a steady rate. Amidst his other work, the videos act as places where Laric can thoroughly research and play with bootlegs, remixes, revisions and reuse, while further pushing their boundaries by mixing disparate sources and topics into a whole that makes sense together, if only for the duration of the video. Without knowing the context or source material, the footage comes across as light, fleeting and accessible, but upon further research, every scene is loaded with meaning. Perhaps the most extreme example of this is the flickering, kaleidoscopic ten-second clip of a man walking down a forest path, taken from Akira Kurosawa’s Rashomon (1950). Playing with the film’s portrayal of varying accounts of a woman’s rape and the murder of her samurai husband as told by four witnesses, Laric sent each of the 250 frames that make up this scene to a different image retoucher, with the request that they colorize the original black-and-white image. The resulting Versions clip is a gesture that very much suits our global age: a compilation of hundreds of individual viewpoints, outsourced to professional freelance workers from all over the world.