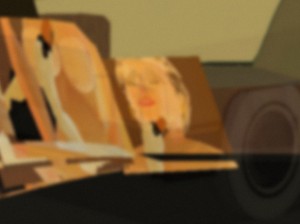 Barry Doupé’s Whose Toes showcases the late Princess Diana and John F Kennedy as its main characters. While the film has added unrecorded interpretations of history, we’re invited to return to past events that have caused discomfort, and to re-imagine a misstep in time. Much like David Lynch’s Mulholland Dive, the disorienting blurring effect and swaying camera style makes it seem as if we’re witnessing these events first-hand, after having crashed our cars ourselves. The sound track plays this up by pairing our fuzzy view with a constant hiss, leaving us to stumble our way through the puzzling story line with what appear to be the effects of a severe concussion. Real and imagined (or rather, scripted) content mix together in a blurry swirl of unresolved fragments and narratives.

Bio  Barry Doupé (born 1982, Canada) is a Vancouver based artist primarily working with computer animation. He graduated from the Emily Carr University in 2004 with a Bachelor of Media Arts majoring in animation. His films use imagery and language derived from the subconscious, developed through writing exercises and automatic drawing. He often creates settings within which a character’s self-expression or action is challenged and thwarted, resulting in comic, violent and poetic spectacles.